In particular, GLI specialises in

Research and education focuses on developing tools to address gender inequality, ensure that the voices and concerns of women are better represented and supporting the development of women’s programmes within the trade union movement.

Sector and company profiles, specialising in the analysis of international trends and strategies in support of international collective bargaining, organising and leverage campaigns. Each ‘Organising in the Global Workplace’ course delivered by GLI is carefully prepared with research on the companies and sectors involved.

Policy debates, strategies and histories of the international movement. The GLI International Summer Schools, along with GLI presentations and discussions at seminars and summer schools of national unions and international federations, are guided by continuous research on the political and industrial strategies of international trade unionism.

Our publications include research understanding and analysing informal and precarious employment, workers’ livelihoods, and the development of informal workers’ organisations.

All for One = One for All: A Gender Equality Guide for Trade Unionists in IUF Sectors (2022)

This ‘Gender Equality Guide for Trade Unionists’ was produced for the International Union of Foodworkers (IUF) intends to foster equality by promoting solidarity, building union strength and tackling the inequality issues that women face. It is divided into two sections:

Section 1: Fighting Inequality highlights gender equality issues on which we should work together to tackle.

Section 2: Union Power for All introduces organising strategies which can:

It is based on a previous guide that the IUF published in 2007 – ‘All for One = One for All’. This new guide is updated and extended with new chapters and stories.

Click here to read the guide in English, French and Spanish.

Fighting for our Future: An IUF Guide on Tackling the Climate Crisis in Intensive Livestock Production (2022)

This guide on tackling the climate crisis in intensive livestock production was produced for the International Union of Foodworkers (IUF) to equip unions representing workers in the meat and dairy sectors to influence the conditions for a just transition, and to propose the necessary transformative solutions to tackle the climate crisis. It includes a guide on the climate crisis and an activity workbook.

Click here to read the guide in English, German, Portuguese, and Spanish.

The guide will also soon be made available in French and Swedish.

Domestic Workers in Europe: Getting the Recognition they Deserve (2021)

10 years since the adoption of ILO Convention 189 on Decent Work for Domestic Workers, this new booklet celebrates the progress that has been made for domestic workers in Europe. It highlights EFFAT’s achievements in giving recognition to domestic workers through solid trade union representation and a political commitment at the European level, and looks at future plans to strengthen recognition and representation further.

This booklet was commissioned by the European Federation of Food, Agriculture and Tourism Trade Unions (EFFAT).

The toolkit includes both a facilitator guide and an activity workbook.

Click here to read the toolkit in English, French and Spanish.

Click here to read the activity workbook in English, French and Spanish.

This toolkit was commissioned by a coalition of Global Union Federations (IUF, PSI, ITUC, ITF, EI, IFJ, IndustriALL, IDWF, UNI Global Union, and BWI)  as a resource for the international trade union movement.

A booklet produced for the International Domestic Workers Federation (IDWF) and Women in Informal Employment: Globalizing and Organizing (WIEGO) in commemoration of the 10th anniversary of C189. This booklet celebrates the progress made for domestic workers since the adoption of ILO C189, and looks to the challenges that still lie ahead. 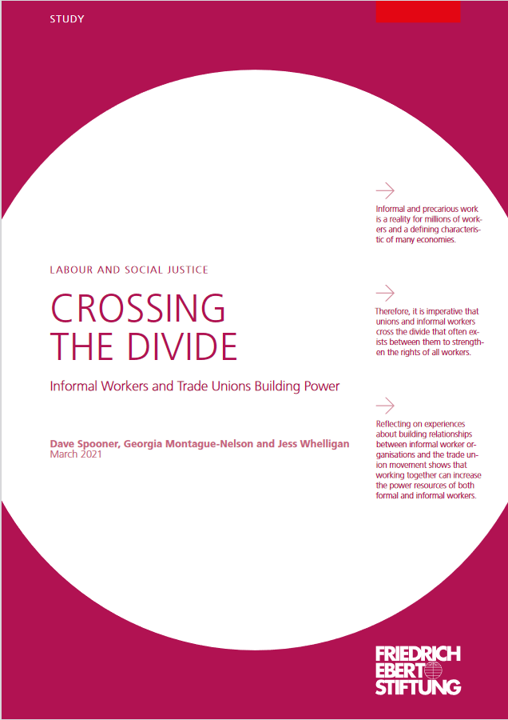 A paper produced for the for the Friedrich-Ebert-Stiftung (FES) as a follow-up to the Trade Unions in Transformation project of the FES Global Trade Union Programme. The paper reflects  experiences and policies from examples of organisations across the spectrum of those with an interest in relationships between informal worker organisations and the trade union movement. A guide for trade unions and associations of informal transport workers on the impact of the pandemic on informal passenger transport workers, the response of transport authorities and the urgent need for reform towards inclusive formalisation.

The guide was commissioned by the ITF. An assessment of the potential impact of the introduction of Bus Rapid Transit (BRT) on the workforce of Dakar’s informal transport industry and a contribution towards the active engagement of transport workers’ representatives in shaping a modern, accessible, efficient and environmentally sustainable transport system for the city.

The project was commissioned by the ITF and undertaken in partnership with the Laboratoire de Géographie Humaine at the University of Dakar (UCAD), and Women in Informal Employment: Globalizing & Organizing (WIEGO). The research and subsequent report were undertaken through a contract with Agence Française de Développement (AFD) to support the Government of Uganda and the Kampala Capital City Authority in preparation of the planned introduction of Bus Rapid Transit (BRT) in Kampala.

This report attempts to provide a detailed assessment of the market struture of the paratransit industry in Kampala, including both minibus (“taxi”) and motorcycle taxi (“boda-boda”) services. It is intended to contribute towards an understanding of how paratransit services can be incrementally improved and professionalised to minimize some of its negative effects on Kampala’s overall transport system, and how to integrate the existing informal service into the proposed new Bus Rapid Transit (BRT) system. This negotating guide was commissioned for GLI Manchester by the International Transport Workers Federation (ITF) as a contribution to the ITF Our Public Transport (OPT) programme.

This guide attempts to develop policy options for transport unions to consider when planning negotiations with agencies on the introduction of BRT and formalisation of the informal transport industry. It is primarily designed for ITF affiliated transport unions in Africa and Asia where BRT is rapidly expanding, but is hopefully of value to all trade unions organising in urban transport.

This full report of research was commissioned for GLI Manchester by the International Transport Workers Federation (ITF) as a contribution to the ITF Our Public Transport (OPT) programme.

This report assesses the potential impact of the introduction of Bus Rapid Transit on the workforce of Nairobi’s informal transport (‘matatu’) industry, and seeks to encourage the active engagement of matatu workers’ representatives in shaping a modern, accessible, efficient and environmentally sustainable transport system for the city. The GLI was commissioned by the International Transport Workers Federation (ITF) to undertake preliminary research and write a baseline study report to assess the likely impact and implications of Bus Rapid Transit for workers in Nairobi. Using mix methods for collecting data and information, this evaluation reviewed the ILO’s interventions with the intention of delivering capacity development in its constituents covering the period 2010-2017. A Case Study of the Amalgamated Transport & General Workers Union (ATGWU) in Uganda which pioneered the successful organisation of more than 100,000 informal transport workers through the formation of alliances with informal workers’ associations. The project was commissioned by the Friedrich Ebert Stiftung as a contribution to its Trade Unions in Transformation project and undertaken by GLI in partnership with ATGWU.

In 2016 GLI Manchester released our new short film, “The Power of Informal Transport Workers” This film shows how informal transport workers across the world are organising in trade unions to fight back against precarious and dangerous working conditions.

Produced as part of the ITF Informal Transport Workers Project, the film brings together interviews with union activists from seven different countries who talk about the challenges that informal workers face and the ways in which their unions are building informal worker power. ILO: Strengthening of Workers’ Organisations in the Arab Countries through Economic, Social and Legal Literacy (2015)

This evaluation examined the efficiency, effectiveness, relevance, impact and sustainability of a project focused on developing the capacity of workers’ organizations in the Arab region. This precarious transport workers booklet was prepared for the International Transportworkers’ Federation based on quotes and examples from the ITF’s survey on Informal and precarious work. Design and management of research and education in Africa, Asia and Latin America to support the democratic organisation and representation of informal transport workers.

The project was a partnership with ITF and FNV Mondiaal, the international development organisation of the Dutch FNV trade union confederation. This research and publication was comissioned by the International Transportworkers’ Federation. Its goal was to improve knowledge of the extent, nature and trends in precarious and informal employment in the major transport sectors, and to identify the experience of union organisation, representation and collective bargaining among precarious and informal workers. This report brings together findings from 51 unions in 38 countries.

The Only School We Have: Learning From Organizing Experiences Across the Informal Economy (2012) Compiled and edited by Christine Bonner and Dave Spooner, published by Women in Informal Employment: Globalizing and Organizing (WIEGO). This research was was commissioned by the Bill and Melinda Gates Foundation to profile the size and significance of those working in the urban informal transport sector in developing and transition countries, and to make suggestions on what can be done to improve the life-chances and livelihoods of urban workers in the informal transport economy.

Taking Stock: Decent Work Opportunities for Women and Men in the Informal Economy (2011) Report of workshop on Organising Street Vendors in Liberia, held in Monrovia in May 2011. This workshop was organised and faciliated by Women In Informal Employment: Globalizing and Organizing (WIEGO) with two closely related aims:

This research and training was commissioned by Realizing Rights/Rockefeller Foundation as part of the project Taking Stock: Decent Work Opportunities for Women and Men in the Informal Economy.